Everyone knows the most abundant bird in North America was driven to extinction a century ago by market hunting and habitat destruction. The very last passenger pigeon, called Martha, died in Cincinnati Zoo in 1914. But few people know the story of the Eskimo curlew that suffered the same fate.

This was a shore and wetland species that bred in the Canadian tundra but wintered in South America. Vast flocks headed south to escape the Arctic chill, but stopped to refuel on crowberries in the peat bogs of the Maritime Provinces, and stop again in the southern U.S. before the final wing home.

They were easy targets for hunters, and very profitable. A reporter noted 2,000 birds hanging at the Hudson’s Bay Company in Labrador that had been shot the same day in the late 19th Century. They were so plump from overfeeding for the journey that when a victim fell from the air it sometimes split open showing the white fat that gave their name, “dough bird.” Their meat was a delicacy served in eastern cities and even as far away as London after shipment in barrels and cans. But they had become rare by the end of the century, and the last one was sighted in 1963.

Over-hunting before the Migratory Bird Treaty Act of 1918 put the species into an irreversible tail-spin towards extinction, and ruined hunting income. Local people missed the wheeling and calling of flocks that visited them seasonally. And Robert Morris, a surgeon-naturalist from New York, celebrated a memory of them in prose and poetry from his exploring days in the wilds of eastern Canada.

“One day in August when standing on a bold crag in the mountains of Labrador, I listened to the lilt of marlins (Eskimo curlews) almost out of sight in the clear blue sky and leaving that day for Argentina on a non-stop flight. A whale was playing in the distant sunlit heaving sea that sent but a passing puff of its thunder up to the heights where I stood. The heavy rumble of a sundering iceberg moving in colorful majesty and flashing dignity down its lane of deep ocean current could not drown out the exultant note in voices of carefree birds that were bound for somewhere of joyful memory for them. The thought was so overwhelming that I sat down on the soft white caribou moss and began to pencil in my notebook some lines that were later published in Surgeon’s Philosophy. I had to stand up to finish the note feeling reverence for a scene that made sitting down in its presence a profanation. In an atmosphere so clear that one could look straight up to infinity the birds rose high before heading south. They became mere specks in the sky and were then lost to view while their voices still came faintly back. The measure of the lines corresponds to that of the wing-beat of the birds otherwise I could not have remained in tune with nature. 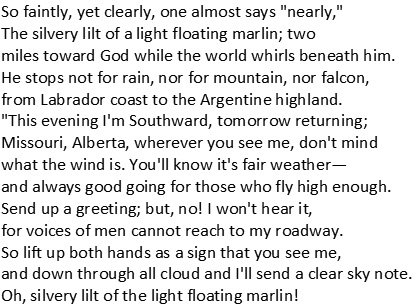 When men’s hands point toward him, they’re lifted up toward Heaven. On the homeward bound steamer from the North that year a group of travelers in the cabin asked me to read extracts from my notebook, but these lines to the marlin seemed to have been “written for myself only.” No one referred to them in the subsequent conversation that evening, but there were plenty of questions about wolves and bears. In the audience there had been a rough old seasoned captain who sailed the seven seas on roving commission. He had recently lost his ship in the ice and was getting himself and survivors of his crew back to a port. Next morning he stopped me as we were passing on the deck, and said, “Them words that you read about the dough-birds (marlins) last night was about right. I wish you would let me see that log of yours again if you don’t mind.” He had doubtless put many a cask of stewed dough-birds in his larder aboard ship, and I was astonished at any sentimental interest in the big gentle birds as it came from that old salt.

Perhaps I was one of the last men to witness a flight of the marlins that were so delicious for the table. Subjected to murderous massacre at both ends of their flight and on the spring return journey by way of the Mississippi Valley they melted away like the passenger pigeon, and only a little later on.” (Extracted from A Surgeon’s Story by Roger Gosden and Pam Walker).

Bryan Watts, an ornithologist at the College of William and Mary, has recently written a beautiful and impassioned vignette about the dough birds. It illustrates how quickly we can shrink biodiversity and rob ourselves of natural wonder.

“The extinction of the dough birds was driven by the tragedy of the commons, a force that stretches back before human civilization itself and that is still alive and well today. The market hunters that encountered the birds in different places throughout their annual cycle were more concerned about their own profits and enjoyment than they were about the future of the birds or about the other hunters along the Great Circle.  We may legislate hunting regulations, but what about the destruction of critical habitat, the consumption of coastal resource or human-caused climate change?  Until we are all able to rise above our own self-centered concerns to see a future beyond our own and recognize that cooperation is not merely a kind gesture but an imperative for the future, no species is secure, not even our own.”

1 Response to Last Flight of the Dough Bird (Eskimo curlew)