Consider the consequences if your largest blood vessels were coursing under surface of the skin instead of deep inside the body. I know it’s hard to imagine. But if the aorta ran the length of your back, branching out to limbs and major organs, the pulse wave might be visible and certainly palpable over the spine. The vena cava would return blood along the midline from belly to chest where it would plunge inside to the heart.  In a lean body this great vein would look like a bluish canal through the skin. Such a vascular anatomy offers no obvious advantages but there are several disadvantages, including a greater risk of hemorrhage. It wouldn’t take a deep wound to release a fatal gusher from either of these vessels; even a bruise might cause enough swelling to seriously affect returning venous blood.

My crazy musing began when I noticed rows of shallow, neatly-drilled holes encircling the trunk of our prized Japanese maple tree. This was the unmistakable signature of a yellow-bellied sapsucker which visits us in winter. Besides licking the sap, the bird finds insects that are attracted to the weeping holes so that its work generates carbohydrates and proteins for its diet. By springtime the sapsucker had left for its northern breeding grounds and the holes had dried up, but the fresh foliage was far less luxuriant than in previous years. Since I couldn’t find any signs of the tree being attacked by insects, molds or viruses I assumed the woodpecker had damaged its conducting vessels which, like the vascular anatomy in my imaginary person, lie just under the surface. 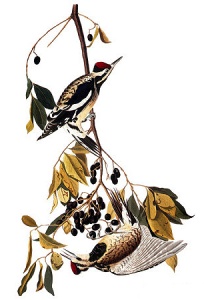 Although there is no circulatory system in plants the vascular tubes are somewhat analogous to blood vessels. Xylem carries water and minerals up from the root system, while phloem shifts the products of photosynthesis in the foliage to other parts. Between these two great highways lies the cambium consisting of a stem cell type (meristem) which generates new xylem and heartwood on one side and new phloem and tree bark on the other.

Trees could not have evolved conducting vessels deep in their boles because the inert heartwood would prevent their girth from increasing. But the price paid for this superficial distribution under the bark is a greater vulnerability to traumatic injury and infection. Where the sapsucker had been drilling the xylem and phloem was permanently damaged because cambium is not replaceable. Fortunately the harm to our tree is not fatal or as serious as lesions to

others in our yard caused by frost or insect borers which expose heartwood to the elements and disease. Only by complete girdling, as American pioneers often did when clearing the eastern forests for farming, is a tree condemned slowly to an early death.

One day while hiking in l’Estrie when I lived in Quebec I came across a tiny shack with a lopsided metal chimney poking out of its roof.  I could have easily missed it deep in the maple forest, but curiosity forced by legs to follow the snow tracks of someone who had branched off from the beaten trail. I ended up at the front door, and because it was unlocked I stepped inside.

It was a dream house for a child. Every surface I touched felt sticky like cotton candy (candy floss). It was a sugar shack where maple syrup was still being made in the traditional way. There was a huge boiler in the corner standing over an open fireplace from which a chimney pipe ascended to the ceiling. This was where sap would soon be slowly evaporating to produce one gallon of amber syrup from every 40 gallons of thin fluid tapped from maple trees outside.

I didn’t have to look far to find those trees. Many of those more than nine inches in diameter had holes now vacant but which in previous seasons had held a spile from which sap would drain into a bucket. Some of them had multiple holes a few inches apart and often arranged in a spiral pattern. The harvesters had been more careful than my sapsucker to avoid harming the trees, but I can’t blame it when pancake days come round.