A long time ago I made a discreet survey of male manes. Perhaps it was an idle way to cure boredom on journeys, but the more I looked the more convinced I became that men who turn gray when young have vigorous crops when they are old. A premature gray head of hair is a lesser stigma than a bald one, but I wonder if it is worn at a price.

I admit there is nothing simple about this (or any) biology, and we are fools to draw a hasty conclusion from extrapolation. Hair can change color and density for many reasons, not least from diet, disease, and aging. Stress can be a factor too. After my mother narrowly survived pneumonia around the time she delivered my youngest brother her hair suddenly turned to silver from dark brown. Surely it was more than a coincidence.

We crudely judge age from hair, although it’s a dishonest guide even for those who wear it au naturel. But sometimes when I see a heavy crop of gray I wonder if it is standing up like a warning flag. I generally ignore anecdotes in medicine but sometimes they get you thinking. I have a friend about the same age with a full head of white hair I envy, but I would rather have a bald pate than his heart attack that came out of the blue (pardon the pun). We thought he had healthy decades ahead of him as someone who lived carefully.

The doctor shrugged when my friend asked, ‘Why me?’  No one had an answer, except to say, ‘It’s in his genes.’ The word genetics covers a multitude of ignorance, although there’s bound to be truth in it that science will uncover one day. Cardiovascular disease cuts a broad swath with its scythe as the biggest killer in developed countries, men ahead of women, but it sometimes runs deep in families predisposed to it at youngish ages. The character of our manes is also inherited, and so I muse whether heart and hair are linked. The oracle was in his hair.

Perhaps is the cautious answer scientists give to the curious public who want a clear-cut answer, preferably not about mice! But mice are in the vanguard of biomedicine. In a paper published this month from the University of Alabama a link was found between the innate immune response and melanocytes in mice. I must backtrack to fill a gap. 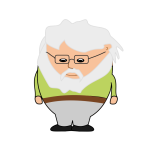 Hair follicles contain melanocyte stem cells that produce melanin pigment granules to give color to growing hair. Those cells are lost with age, which makes hair progressively grayer until it eventually turns ‘white.’ [Strictly speaking not white but semi-transparent to reflect light.]

Are melanocytes connected with heart disease? It’s not a question you often hear. There is no direct physical connectivity, of course, but a link exists with the immune system. Melanocytes do not originate in the conventional immune system but they work in many ways like immune cells defending the body against external danger. That makes sense for cells stationed at the surface of the body where they are guardians against infection as well as providing melanin to protect the more vulnerable parts of the body from solar radiation. Melanocytes deserve a lot of credit.

The researchers studied a transcription factor called MITF we can call a ‘gene switch.’ It operates in both melanocytes and immune cells. When they switched MITF off in mice the immune system was activated as if it was responding to an infection. At the same time melanocytes were depleted and the fur turned gray. But if graying is a sign of galvanized immunity how does this link with broken hearts?

Heart disease is regarded as an inflammatory response that can be caused by ‘alien invasion.’ There is firm evidence that common bacterial and viral infections can promote plaque formation in arteries by inflammation, and when plaque peels off it can block blood passing through the vessel to cause a heart attack.

What might this mean for health and disease, for hair and baldness, and for my friend? Would he have been healthier had he turned bald instead of gray? Of course, he would not have avoided his fate by dyeing or shaving his head.

If he had a viral load years ago, especially if it was chronic although not necessarily obvious, the MITF switch would be turned off in his immune cells so they could respond to the challenge. Plaque formation would be the trade-off of inflammation. At the same time the same switch would trigger graying.

This speculation doesn’t explain why men who turn gray prematurely tend not to go bald. And it leaves unanswered the bigger questions why some men turn gray early and any definite connection with heart health. My friend’s attack might have been caused by lifestyle or an infection, and aggravated by the very thing he could never avoid. His genes. We will understand some day if the MITF switch has differential effects in men with early graying from the writing in their DNA code, but for the present we have to turn to mice for provisional evidence. It’s intriguing that when the researchers examined a strain genetically prone to graying they found that when the immune system was stimulated the animals went gray at younger ages.

My theory of hair and heart won’t help my friend. But perhaps at the first signs of graying if men in their early 30s and 40s test blood markers of inflammation they might dodge the bullet by reducing other risk factors in their lives to normalize their fate. Forewarned is forearmed, as they say.